Warning: A non-numeric value encountered in /var/www/html/xingdance.com/wp-content/themes/Divi/functions.php on line 5841 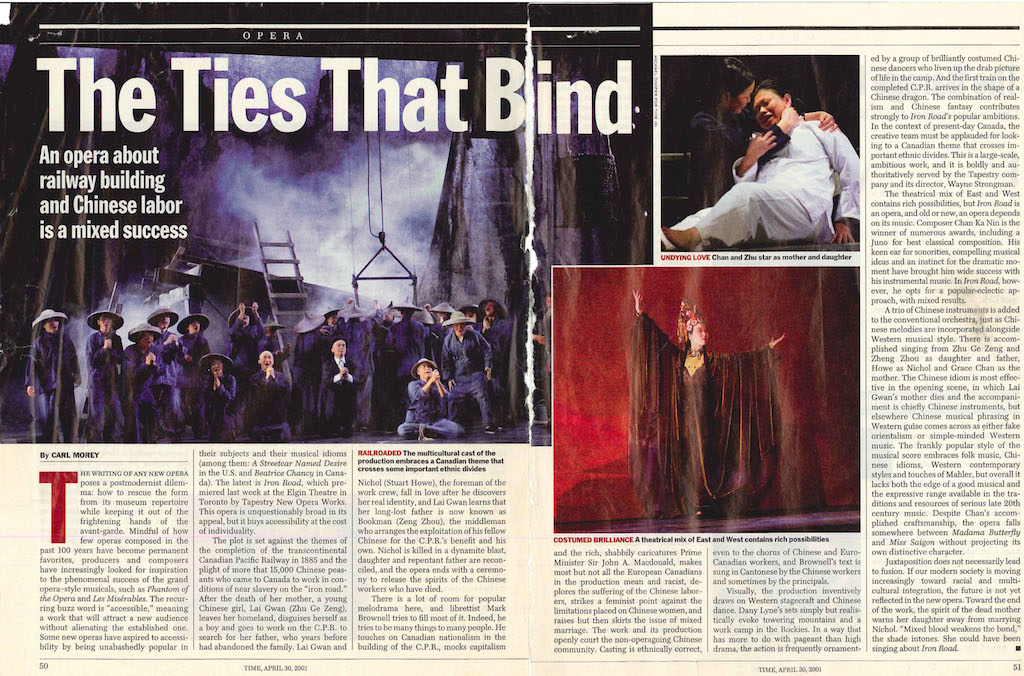 April 20 at the Elgin Theatre saw the world première of a new Canadian opera, “Iron Road”, produced by Tapestry New Opera Works. In it composer Chan Ka Nin and librettist Mark Brownell tell the tale of the building of the Canadian Pacific rail line as seen through the eyes of a Chinese girl in search of her father. The subject, the commemoration of the Chinese labourers who built the railway, is important. The production is brilliant. The music is accessible. The libretto, however, presents problems neither the music nor production can disguise.

The focus of the story is Lai Gwan, who, after the death of her mother, leaves China to find the father who abandoned them in search of wealth in the New World. Disguising herself as a boy, she joins a crew of Chinese railroad workers only to arouse the ire of the Bookman, the man who contracts the railroad work, and the love of James Nichol, the crew foreman. She is torn between tradition and love for a “gweilo” (non-Chinese), indignant with her status as woman in a man’s world and outraged by the exploitation of her countrymen. These tensions are resolved when the three main characters find themselves buried in a collapsed tunnel where Nichol dies and she reconciles herself with her father. At the end she dedicates herself to performing the rites for the labourers who have died so that their spirits will find peace.

As this simple summary indicates, Brownell has not really created a new plot for a new opera as much as amalgamated antique plot devices one might have thought had died out with Puccini. With two unknown identities revealed, a beloved saved from death in the nick of time, a beloved dying unbeknownst to a lover present and a cataclysm that all too conveniently resolves personal conflicts, Brownell’s libretto owes more to melodrama than to history or real life. One wonders whether such an artificial plot is really the appropriate medium for such a serious and important subject. Brownell tries to make the plot relevant by cramming it with as many current topics as possible–feminism, capitalism, racism, miscegenation or political appropriation of others’ achievements. Although he does give each main character a reflective aria, so many agendas and so much happening to the characters give little room for any development.

Anyone familiar with Chan Ka Nin’s orchestral music will be surprised at how much he has altered his style to make it more accessible. It is so accessible and so eclectic that one could be forgiven for thinking Act 1 part of a lost musical by the creators of “Les Misérables”. We must wait until the sensuous and complex prelude to Act 2 for a style more recognizable as Chan’s own, extending through a remarkable dream sequence and into the Bookman’s powerful aria in Scene 1. After another descent into megamusical, Chan voice re-emerges with the fantastic appearance of the first train to run the line and later in the profound requiem for the dead that closes the work. I understand the desire to make a new opera less daunting by choosing a simpler idiom, but Chan’s own voice because it is more complex conveys immeasurably more intensity, mystery, tension and depth than his “lighter” style. That is why the second act, with much less pastiche, is so much stronger.

The lasting achievement of the work, besides its subject matter, lies in the fascinating dialogue Chan has created between Eastern and Western musical traditions. Just as the libretto is in two languages (a third of Brownell’s English translated into Cantonese by George K. Wong), the 36-piece orchestra comprises both Western and traditional Chinese instruments. The Chinese instruments accompany the Chinese workers and the thoughts about tradition in divided characters like Lai Gwan and the Bookman, while the Western instruments accompany the white men and the divided characters’ New World-minded thoughts, mingling when there is conflict between them. This is a technique sure to be influential in any future operas about the immigrant experience.

The cast is excellent both as singers and actors. Zhu Ge Zeng is terrific in the central role of Lai Gwan. She can soften her coloratura when needed but hits her stratospheric notes with absolute security. She portrays Lai Gwan as a tomboy, tough on the outside but not lacking in vulnerability and doubt about her enterprise. Canadian Stuart Howe makes James Nichol, who falls in love with Lai Gwan, a very believable character, though his arias, the most pop-influenced in the opera, don’t give him much opportunity to show the range of his fine tenor voice. American bass Zheng Zhou as the Bookman is given the single best aria in the work showing his acting abilities and strong voice to their best advantage. Canadian mezzo Grace Chan sings the role Ama, Lai Gwan’s mother, with great feeling and makes the most of the contrast between the dying Ama and Ama as the admonitory ghost who haunts Lai Gwan in Act 2.

The minor roles are also well played and sung with Curtis Sullivan as a cartoonish Sir John A. MacDonald, Martin Houtman as the inept Donald Smith, Henry Li and Jovanni Sy as labourers and Brian Duÿn as a Herder. All is under the firm control of conductor and Tapestry Artistic Director Wayne Strongman, who never allows the forward momentum of the work to slacken.

“Iron Road” is certainly the finest large-scale work yet by both director Tom Diamond and designer Dany Lyne. Such is the closeness of their collaboration that it is difficult to know whether decisions about design influenced the direction or vice versa. Lyne’s imaginative sets and costumes ensure one visually stunning scene after the next. The huge red lacquer cut-out that sets the first scene in China, the boat that sails for Canada and the magical way land is sighted, the inventive way flying banners chart the railway’s progress, the labourers’ camp in the mountains and the “Iron Dragon” itself when it first travels the rails are just some of Lyne’s many creations for this work that deserve recognition. Bonnie Beecher’s highly atmospheric lighting enhances each scene.

Tom Diamond shows mastery in directing both individuals and crowds always with a view toward illuminating the text while responsive to changes of mood and tempo in the music. Choreographer Xing Bang Fu contributes dazzling dance sequences in both acts of the opera combining movements from traditional Chinese opera with modern dance.

As a spectacle “Iron Road” is continually exciting, and, once Chan allows his own voice freer rein, so is the music. Intellectually the work serves to heal a wound by commemorating all those who died in building Canada’s national railway. This makes it all the more unfortunate that, until the sombre final scene, the incredibly clichéd libretto weakens our emotional involvement.